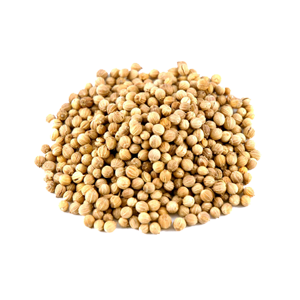 Coriander is a spice produced from the round, tan-colored seeds of the coriander plant (Coriandrum sativum), which is a member of the parsley family. The word coriander can be used to describe the entire plant: leaves, stems, seeds, and all. But when speaking of coriander, most people are referring to the spice produced from the seeds of the plant. The leaves of the plant are commonly called cilantro, which comes from the Spanish word for coriander, or Chinese parsley. Coriander roots also appear in culinary use as a pungent addition to Thai curries. Coriander grows as a native plant around the world Coriander seeds have a pleasing lemony flavor and floral aroma. The flavor goes very well with cumin and many recipes include equal amounts of the two spices. The plant’s leaves and the ripened seeds taste completely different and they cannot be substituted for each other. Fresh cilantro tastes pungent, and to a certain percentage of the population, it tastes soapy. Coriander has been used in traditional medicine for stomach ailments. It is sometimes included in teas that are designed to help relieve constipation. Research is being done to see if it has any verified health benefits for conditions such as diabetes. Fresh cilantro greens provide fiber and phytonutrients, while the seeds have a small amount of calcium, potassium, magnesium, and phosphorus.

The small, creamy brown seeds of the coriander plant give dishes a warm, aromatic and slightly citrus flavour totally different to fresh coriander leaves. They are commonly used in Indian cooking as well as featuring in Asian, Middle Eastern and Mediterranean dishes,Improves Kidney functioning. Coriander seeds are effective for treating urinary tract infections as they improve the filtration rate of kidneys enabling quicker urine generation. It leads to lower water retention in the body and allows it to flush out toxins and microbes.

There are no reviews yet.

Be the first to review “Coriander” Cancel reply